Said and Khon To Trial With Oldham Athletic FC 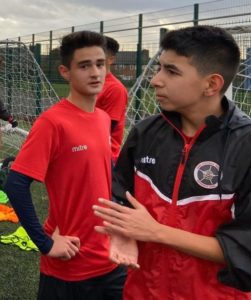 Chris, who also scouts for League Two club Oldham, has been impressed by the spirit, attitude and ability that these two young players have demonstrated of late. Said and Khon are 15 years old and are currently studying for their GCSE’s with Abbey College Manchester.

This presents a great chance for the boys to measure themselves against local young players who are competing for a place in the Oldham squad.

Chris, who is also a qualified Strength & Conditioning and Fitness Coach, has been working on the IHM coaching team since September 2019.

If you would like to study at a top performing Manchester boarding school whilst taking your football to the next level with IHM, contact us now.