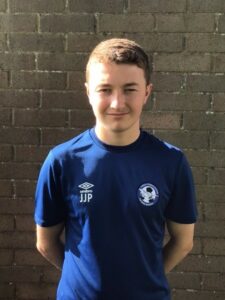 One of our first student players on the Ellesmere programme, James Prescott, has signed for Airbus FC in the welsh league after being with the Ellesmere academy since the start.

James was one of the first players to sign up to the Ellesmere Academy when IHM & Ellesmere College launched the partnership. Over the seasons James has been a prominent member of the team, initially working with players who were older than him, which really pushed him on the pitch, then becoming one of the lead players.

During his final season on the academy, working with head coach David Raven, James really flourished and was recommended to TNS of the Welsh league by David. On the trials at TNS James impressed and they offered him a place in their squad, which would have meant him leaving Ellesmere college to attend. James, being a very mature young man, looked at the options and decided he didn’t want to leave the college with not long of his education to complete, so stayed and continued with the academy. Following these trials, the coach at TNS still saw great potential in James and passed on his details to Airbus FC who invited him in. Last season James began to train regularly with Airbus and has played a number of games against Llandudno, TNS, Bala, Macclesfield, and Caerwys. 6 weeks ago, after his trial period, James was informed they wanted to sign him for the U19s. He’s now really enjoying his football at Airbus, trains three nights a week and is involved in games at weekends.

James’ father, Stephen said “if it wasn’t for the Ellesmere football academy and the time he spent with the coaches he would never have had this opportunity to take this next step.”

Head coach David commented “James is a shining example of what can be achieved when a mind is focussed. He has worked tremendously hard for this opportunity and I’ve no doubt he will grasp it with both hands. It’s certainly well deserved”

Everyone at IHM and Ellesmere football academy wish James all the best in his next steps on the football journey.

If you would like to join us at Ellesmere for your first steps in your football and education in the UK contact us now!