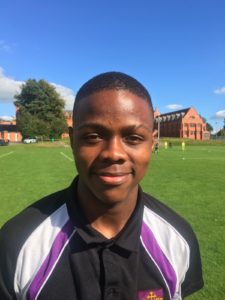 McDonald has demonstrated excellent academic and sporting achievement this year and has stood out amongst his peers in his contribution to the Wakeman-Lambart House.

When joining Ellesmere each student is allocated to a competitive house. All students have the opportunity to play for their house during the year. There are 4 houses in Middle and 6th form. Meynell, Woodard, Wakeman/Lambart and Talbot. Lower school is divided into three house Phillips, Brownlow and Heywood.

The competitive house system gives another tier of participation and competition for all the students to enjoy. The emphasis is on taking part and giving your best effort. House colours are awarded for contribution to the house and are a treasured possession for all who attain them.

McDonald has been an integral member of the IHM team as they have played through all the matches in the Shropshire league this season. This award is well-deserved.

“McDonald has been inspirational in his approach to both his studies and his football since he first enrolled at IHM football academy at Ellesmere College. I have watched him flourish and develop into a well-rounded athlete. He must be proud.” enthused IHM Director, Peter Hayes.

If you would like to combine studying at an outstanding English boarding school with participation in a full-time football academy, contact us now for details of how to apply.