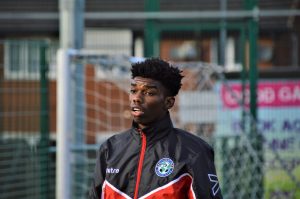 Last Wednesday I bumped into Marcelus, aged 20, who had just arrived to begin his Football Only programme with us at IHM Football Academy. I hadn’t been introduced, he was waiting in the school break out area. I was busy trying to measure up a wall of our new school. We are planning some really stunning visuals to put onto the walls. What struck me about Marcelus is that he immediately noticed that I was struggling to reach and jumped up and offered to help me. He started to chat, I realised who he was and we introduced ourselves. Marcelus then told me what a great start he had had to his course, he was impressed by just how kind and helpful everyone had been to him and he remarked upon how it had helped him settle in and feel at home. I asked about his home stay hosts and whether he felt that he had been made to feel welcome. Marcelus was really enthusiastic when talking about Mrs Morris, it seemed as though he had everything that he needed there, home from home.

Well, Marcelus then agreed to do a video interview with me which was great because it sets out from his point of view exactly how his arrival experience had gone. Later that day I bumped into Marcelus again as he was starting to work with his colleagues on the training ground. He’d met Coach Matt and looked like he’d always been a key member of the squad.

What struck me most about Marcelus and what I want to make clear to any other young player out there reading this now, is the power of making a good impression. The attitude that Marcelus displayed in school and on the pitch that same day left a powerful impression on all of us, staff, players, students and coach. and that means he has already been noticed for the best reasons. When a young player attends a trial or showcase event at IHM Football Academy UK, the scouts are keen to learn which player, amongst the 50 they are there to watch, stands out from the crowd. Marcelus has already stood up and stood out. I wish him well and will follow his progress with interest.