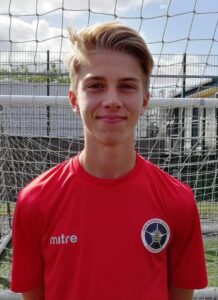 Julian Jensen joined the IHM academy football academy during the season 2018 – 2019. As a dedicated player, Julian relocated from his home country to train and study at our Ellesmere campus, working with our head coach, David Raven, on a daily basis to improve his ability. Following this season at Ellesmere Julian moved to our Manchester Academy site to look for more experience and opportunities in his footballing career, ever dedicated to progress on with an aim to play at the highest level he could.

During his time with us at the IHM Academy Julian showed himself to be a very enthusiastic, ambitious and driven young man, determined to achieve in his goal to become a footballer. He was resilient in his time, working through injury and coping very well with being away from home to pursue is goals.

Julian has definitely progressed on in his football career, still having that determination and drive to go as far as his can and still looking for opportunities in the game. Julian has successfully secured a contract with Semi Pro Team in the Netherlands called HBS, one of the oldest clubs of the Netherlands set up in 1893. He is currently a regular for their U19s side, impressing the coaches with his performances.

About his time in Manchester Julian says “ I had a fantastic experience at IH Manchester. From the day that I arrived all the coaching staff were very welcoming and approachable whenever a problem occurred, there was always somebody around to help. Training 5 times a week with each session being different to the other really improved me as a player and made the team feel like a family. The Use of technology at IH Manchester let us look back at our individual performances and discuss these in classroom conditions with the coach to see in what areas we had to improve and where we did well. We could also take these clips and send them to our Families back home to enjoy. We were also given opportunities to display our skills to Scouts and Coaches from the Manchester region which motivated everyone in the team to work hard.”

Julian is continuing to improve and is looking for further opportunities working with IHM Director Mick Brennan to develop his online CV to see if he can go that one step further.

Mick Said “Julian was a fantastic young man and a model student/player on the programme. His work ethic, drive and determination to make it was great and it’s a pleasure to say we were a small part of his current success. With that attitude I’m sure he will continue to thrive and as he’s part of the IHM family we are always here to offer advice and support him.”

Julian is just one example of how the IHM academy players can spend time in the UK to learn the game and develop as a player, then return home to give themselves a better chance of success in the game.

If you would like to join the academy to develop your football and education contact us now.