“It’s about development. Every single day.” 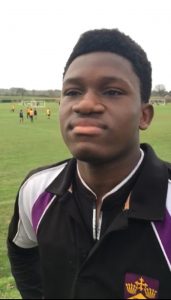 “Ellesmere College is great. It’s about development every single day. Every day counts. It’s all about team work.”

Glenn is from Ghana and has been a student at Ellesmere College since September 2018. He has also been a member of the IHM Football Academy there since that time. What Glenn really appreciates about being a member of the IHM squad is the individual feedback he gets from his coaches there. He loves how they will quickly identify his strengths whilst at the same time making him more aware of the areas that he needs to develop and then showing him how to address and improve those.

One thing that Glenn has learned from his coaches, David and Chris, is to be more aware of his position on the pitch. Glenn has got great pace, but needed the discipline to know when to unleash it. By placing himself in a more intelligent place whilst off the ball, he can time his runs much more effectively. It is this improved understanding of the game and heightened tactical awareness, that has helped to make Glenn a better player.

Back home Glenn’s coaches concentrated on developing a young player’s physical development; working on improving their fitness and strength. However, here at Ellesmere, Glenn has noticed that he is receiving much more technical help with his football. Glenn also greatly appreciates the high level of academic support that he can draw upon at Ellesmere College. He is reassured that there is always a teacher to consult, if he ever needs a little extra help or an additional explanation of a new topic.

At half term next week Glenn will be moving to Manchester and training daily with the IH Manchester city centre squad. A few Ellesmere players are making the journey over to the IHM city centre academy and are looking forward to seeing how they measure up against the young international players there. Glenn is certainly relishing the challenge. He radiates confidence and we wish him well:

If , like Glenn, you would like to be the best that you can, take a look at what we offer at IH Manchester Football Academy and come and join the team.