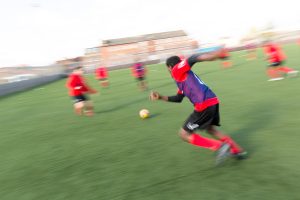 When Kelvin first contacted us he was 17 years old and had just completed his secondary education certificate in his home city of Nairobi, Kenya. The only thing that he was sure about was that he wanted play football for a living. It was his key motivator. His dream was to sign for a big pro club. We chatted to him and his parents on Skype to start to understand at what level he was playing for then back home. We requested and received written references from his current coach and his latest school reports. We then had the difficult conversation about what should happen if he didn’t make it as a pro player with a top club.

IHM Director, Peter Hayes, sums up the IHM ethos when he says:

“When they arrive, they want to be a pro. But we slowly start to open their eyes as to what else their talents can be used for to try and create positive change in their lives.”

Pete talked Kelvin’s Plan B through with him and it became apparent that Kelvin had a passion for football coaching, especially with younger players. His references and school reports showed that he had a patient and mature character that made him ideal for this work. Kelvin managed to get experience coaching young players with the Head Coach at his old international school in Nairobi. We looked at the best local university undergraduate programmes for Sport Science & Coaching and Kelvin particularly liked the look of the one at UCLAN in Preston. With the help of the IHM university counsellor Kelvin managed to get a conditional offer to the relevant foundation programme on successful completion of his BTEC Level 3 Diploma in Sport Performance with us.

Kelvin is here with us now and his latest progress report shows that he well on track to achieving the required grades. We all wish him well.

However, I’ll let Kelvin have the last word:

“IH Manchester has given me a platform to express myself on and off the pitch. IH Manchester provided the best course for my requirements. While back home I did not know what the best next step in life should be. But after enrolling with IH Manchester my future / career plans were laid out. I would highly recommend IH Manchester to anyone out there wishing to work in the field of sport.”