Glenn is Crowned Player of the Month 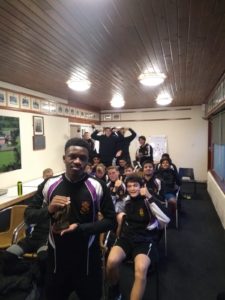 It was fantastic to see Glenn, aged 17 years from Ghana, crowned Player of the Month for October. This is Glenn’s 2nd academic year at IHM at Ellesmere College and he has taken on board everything that Head Coach, David Raven, has told the squad.

David said that Glenn has worked exceptionally hard this month:

“His attitude has been first class, he just needs to keep it up.”

Glenn and the IHM squad at Ellesmere study full-time and then their daily football coaching and match play wraps around the school timetable. Ellesmere is a high performing English boarding school set in the beautiful Welsh borders.

This year David has entered the team into the Shropshire youth league and so the players are enjoying regular competitive football as they find their feet. The team is performing well, having won many of their games, drawn one and lost one.

You can read more about the IHM Football Academy at Ellesmere College here.