“Coach Matt told us; you have to put your heart in it to win the game!” 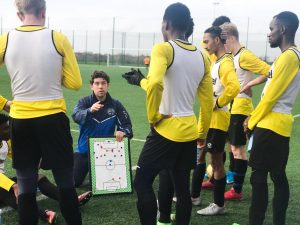 “Matt’s an incredibly enthusiastic coach. He’s very knowledgeable and relates extremely well to our international players. He understands their individual needs and limitations and gets the very best out of them.”

That’s the glowing endorsement I got when I asked my fellow Director, Mick Brennan, what he though about IHM Head Coach, Matt Lowe. And then we began chatting about Matt and everything that he brings to the academy; and it soon became clear that he IS everything that IHM stands for, the perfect role model for our young student players. Matt graduated in Sport Science (BSc Hons – Liverpool Hope University) in May 2014 and holds a double Distinction BTEC award, as well as a PTTLS teaching qualification. Moreover, Matt’s comes from a football family, his father is first team coach at Championship club, Blackburn Rovers. Matt scouted for Blackburn when he coached the youth academy there, but now he coaches the youth squad at Premier League club, Everton.

Then I remembered seeing one of the current squad, Mohammed, 18, from Nigeria, who is also studying for his A levels, talking to camera before the match against Fleetwood Town yesterday. Mohammed was full of praise for his coach, Matt, when he said:

“Since I joined IHM I’ve seen major improvements in my football, especially my technical skills. Everyone, our coach, sees that we improve.”

Mohammed went on to reflect on the team’s performance against League 2 club Macclesfield Town’s development squad, where they won 5-3:

“Before the game, in the changing room, the coach motivated us. He told us; you have to play with your heart to win the game. We want to win and we do our best to win.” 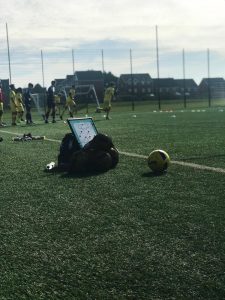