“At first when I came here it was tough to adapt to the new environment.” 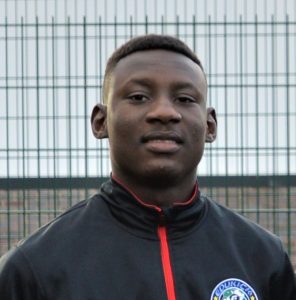 Mohammed has already learnt a great life lesson since arriving at IHM. When you truly believe that you can win and overcome adversity, you can make things happen for yourself.

He was reflecting on the IHM squad’s recent hard fought victory over League 2 Macclesfield Town FC’s development squad on a cold Monday winter night in Manchester when we caught up with him last week:

“It was really tough. The first time we played them, we lost. So when we stepped out onto the filed this time and the weather was bad, we knew deep down that we had to win this game. We had to put our all into it. We thought; want to win and we’ll do our best to win.” insisted a proud Mohammed. He did also credit this coach, Matt, for the win. The consistent encouragement and positive attitude that the squad receive from him helps them all individually when times get hard:

“Before the game, when we were in the changing rooms, the coach motivated us. He told us that we had to put our hearts in it if we wanted to win.”

Mohammed is no stranger to tough challenges, he has a very busy schedule and has been studying A levels full-time since he arrived in September as well as also training 2 hours every afternoon with IHM. He also initially found it hard to adapt to the Manchester climate, coming from Nigeria. He had to make a whole new set of friends, classmates and team mates too. But, he brought his characteristic determination to this life change and found that with the help of his new friends and coach he soon settled in and made Manchester his new home:

” At first when I came it was tough to adapt to the new environment and everything.” says Mohammed, but then he found his team mates and all the staff to be so friendly that everything worked out fine. He is also sure that since coming to IHM he has experienced major improvements in his football and in his technical skills. He’s resigned to having to focus, work hard and always give his best. Which is the ideal mindset for someone who wants to make it as a pro player:

“I want to be a footballer. I want to play football as a career.”

But with the team winning 5-3 against Macclesfield that night and Mohammed playing a key part in that victory, he is showing that he has the strength of character to make good things happen for himself!