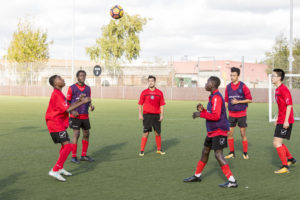 IHM stage showcase events in Manchester twice per season. It allows IHM student players to train and play in front of invited pro-club scouts. It gives our players the opportunity to show exactly what they can do. Successful players are then invited back to interested clubs for a trial. In the past IHM has hosted scouts from all levels of club including; Manchester United, Manchester City, Blackburn Rovers, Stoke City, Preston North End, Norwich City and many League 1 and 2 clubs as well as semi-professional clubs. USA soccer scholarship partners, “Soccer Assist”, also usually attend. Many players of our young players have earnt trials with clubs or won US soccer scholarships as a result. Some have even gone on to play for teams.

Unfortunately, due to the current need to stay safe and protect ourselves and our communities during the coronavirus crisis, this year we didn’t get our players on to the pitch and in front of the scouts in April. IHM did however stage a hugely successful Virtual showcase event. On Wednesday 29th April 2020 IHM Football Academy released a link to a live web page to all of our 63 UK club contacts, our network of international scouts and coaches and to “Soccer Assist”. This meant that our student players still had the opportunity to impress and catch the eye of UK and international pro and semi-pro clubs, as well as US university and colleges offering soccer scholarships in the USA. IHM partners, IPSO (“International Professional Scouting Association” and “Footballers Global” (an online international football scouting network), were also invited to view the player profiles on our pages. In short, this represented an awesome chance for all of our players to show case their talent and potential even during the lockdown. From the event IHM received 9 requested for further information. 2 of those players being lined up for pre season training with a welsh premier league side and 7 looking towards fantastic opportunities in the US. Overall the event was a big success with over 2000 hits on the website in the first 2 days.

“Our April showcase event was great. We had a fantastic response from everyone involved and it gave our players a great opportunity to showcase their ability whilst they can’t physically be on the pitch. It also meant that they were focused on creating their highlights, giving them time to watch themselves back and look at where they work well on the pitch and where they can improve on. We received some great highlights from the lads, showing they really care about their progression”

So, that is why IHM Football Academy are doing it again!!!!

On Wednesday 15th July the IHM Virtual showcase has gone live once more. This time its gone out to 87 contacts and will be shared across all our platforms. With new players involved and some upgraded profiles from our current players, it is set to be another great event.

You can see the new July Virtual Showcase Page HERE!!!!

IHM Football Academy is a football boarding school. That is, a private boarding school, open to international students, with a football academy. IHM is currently taking registrations for the August pre-season and September new academic year.