“You are only limited by what you believe you can do.” 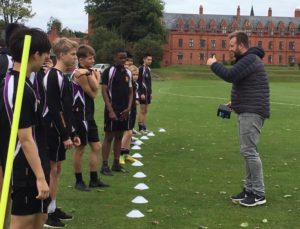 This week British Cycling coach, Oli Suart, came to deliver a talk and a fitness training session to the IHM Football Academy squad at Ellesmere College. The title of the workshop was “World Class Expectations”.

Oli works with elite athletes across many disciplines, including Premier League football. He firmly believes that by developing a winning attitude and making winning a habit, athletes can outstrip their expectations. In fact Oli believes that we limit ourselves by underestimating what we think that we are capable of achieving.

Oli simulated the expected work rate of a Premier League player to allow the young student players to experience what that feels like, albeit over a short period of time. His philosophy is simple; the more you put into something, the more that you get out of it. From his experience he knows that hard work and self-belief supersede natural talent.contact us

And that was a very powerful message for the young players in attendance on the day.

The father of one of boys emailed us after the session to say:

“My son is over the moon about yesterday’s session. Whatever transpired in that session has inspired the young man to a great extent. His morale is very high.

I just wish to thank IHM for affording my son the opportunity to pursue his dream.”

Oli knows too well what it takes to be a winner. He was a professional cyclist in his earlier life and was the British and European champion. However, Oli also know how important it is for even a champion to have a Plan B. His career was cut short overnight following a serious cycling accident. He lost his titles, his sponsorship and his place in his team. But, Oli picked himself up and went to university to study Sport Science.

“The only thing all of us know, is that the harder we try, the better we’ll do. It’s all about mindset and attitude. You are only limited by what you believe you can do and what you work towards doing.”

If you believe that you can make and want to join the IHM Football Academy squad, contact us now!

Watch the full video of the event here