Winning is a habit

Yesterday the IHM squad were put through their paces as British Cycling coach, Oli Suart, took the afternoon’s training.

And what a session it proved to be. Each player learnt so much about themselves. And every player slept soundly in their beds last night. 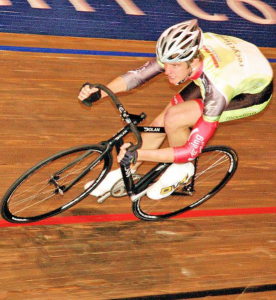 “As a competitive cyclist I was driven by a need to be the best – and fastest – I could be.

After my short but successful career as a cyclist was cut short, I took the decision to start coaching. Passing on the knowledge I had gained from the world class coaching at British Cycling, I am equipped with all the knowledge and skills required to get the most out of cyclists of all abilities and ages.

Cycling is so much more than turning the pedals – there has to be a drive towards a goal.

Together, we can set these goals and carve a path towards them using hard-gained experience and expertise.”

Oli interspersed sections of his motivational presentation with practical fitness testing sessions out on the training pitch to illustrate his points.

His message was loud and very clear: always aim high, higher than your original goal. You are capable of much more than you think you are. Oli highlighted the personal psychological doubts that can prevent each of us from fulfilling our full potential and that only with the correct positive mindset can we ever be expected to excel. But, this is in the gift of every player. We need only ask ourselves; “How far do I want to go?” and then give ourselves permission to get there.

Oli reminded the squad of when Ronaldo was part of the winning team who won the Champions League in a 4-0 final. His team mates were off to celebrate, but Ronaldo had some unfinished business as he felt he hadn’t performed as well as could have done in one set piece. He then went back out onto the pitch and practised for a further two hours until he had mastered this skill.

This is what separates champions from the rest. This is the winning mindset our player must emulate to be everything they can be.

Our coaches were equally inspired yesterday by Oli’s session and look forward to working with the squad to help them embrace his “winning” message.