Will Mullock – Looking To Progress 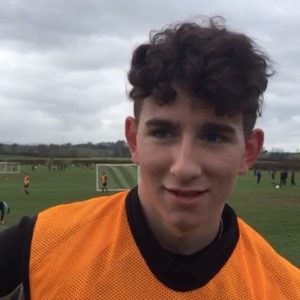 Our senior player at the IHM Ellesmere academy and last seasons player of the year, Will Mullock, is taking the initiative during his downtime at home and looking for opportunities to progress on in his game.

Will has been with the IHM Academy at Ellesmere College from the outset, one of the first members to sign up for the programme. Throughout his 3 years on the programme Will has been a stand out player, both on and off the pitch. Having won a number of player of the month awards and man of the match awards, last season Will was voted as player of the year, all of his teammates look up to his ability and professionalism in the game.

During the past 3 years Will has not only balanced our full time training programme, but has successfully completed his A-levels to a high standard.

On the pitch his success includes playing with Welsh League clubs TNS & Airbus, along with representing Shropshire County U19s.

Now, whilst there is no football going on in the UK, Will has taken to PC to compile his own highlights to share with clubs. Will’s aim is to secure trials with as many league and semi-professional clubs as possibly to showcase his ability and progress on in his playing career.

IHM Director of Football said “Will has been such a fantastic player and young man to have on the programme at Ellesmere. Having been there from the start and seen the developments in the programme, Will has been a role model for all the players as they have joined over the three years. His ability is fantastic, he has soaked up all the information from the coaches and taken it on board to become the player he is today. This past season has been remarkable for him. From the games I’ve seen him in he has been the outstanding player not only for our IHM side, but on the pitch as a whole. Just watching his highlights video it’s clear that he changes games and if a focal point for all the play in the Ellesmere team. Wil this football season looking like it is coming to an end early, it’s a shame we won’t get to see more of Will on the pitch. Will has completed his A-levels at Ellesmere and will now be moving on. He is such a true professional and outstanding player we are sure he will gain an opportunity soon in the game to realise his dream. We wish him all the best for the future”

Everyone at IHM Academy wish Will all the best for the future and in his quest to play, we feel sure he will achieve this goal and would recommend him to any club looking for dedicated, quality players.

For more information on Will or to contact him, email Director Mick Brennan and he can put you in touch – michael@ihmanchester.com