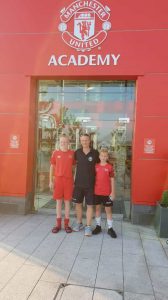 In April 2018 Adam travelled over to the IHM Showcase event with his father, football coach Douglas and many of his team mates.

He impressed the Manchester United scout who was present then and as a result was invited to train with the MUFC Emerging Talent squad at the Carrington Training ground.

This was an exceptionally exciting consequence of the Showcase for Adam. He did well at the session he later attended and managed to hold his own in a very competitive environment.

So much so, that the coaches and scouts agreed to keep an eye on how he developed as time went by. Sure enough, when Adam recently returned to Manchester and took part in the IHM Showcase event on the 17th April this year, the MUFC scout returned to see how he had come on. He was again impressed with Adam’s skill and winning attitude and has invited Adam back again to train with the Emerging Talent squad in July.

Keep up the good work, Adam. You are displaying the qualities of a successful player.