“The lads ask me questions, they want to learn.” 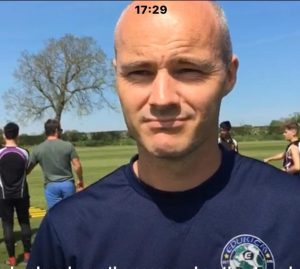 Head Coach at IHM Ellesmere College, David Raven, talks to Director of Football, Mick Brennan, about how the season has gone and what he hopes for the new season ahead.

David is extremely proud of the young players in the squad and how they implement in a game what he has taught them on the training ground. He has seen dramatic improvement in the players over this academic year.

“They’ve come on leaps and bounds. The stuff we’ve put in place for them, they’ve took on board.”

Last Monday evening the team were tested in a friendly match against the Tranmere Rovers academy. Despite not coming away with a win, David was really impressed with how the boys performed. The IHM Ellesmere Head Coach describes the contrast in the level of performance of the team now compared to the beginning of the Autumn term as “like night and day”. David is convinced of the benefits the players are taking from the coaching sessions with IHM.

Mick asks David what his highlights of the year have been, and David doesn’t hesitate. It’s clear that his biggest satisfaction as a coach is seeing the young players who he works with day in and day out developing so well:

“For me, as coach, it’s great to see them put things across in a game that we do in training. We try and train them at high tempo, make it short and sharp, lots of passes, lots of touches. To see them put that into a game, as a coach, that’s the most pleasing thing.”

As an ex-professional player with a long and successful career in football behind him, David has clearly got lots to offer the squad. It is clear that he is impressed with the way the players ask him questions and that equally, he is delighted to share his experience with them.

“The lads ask me questions, they want to learn. So, again as a coach that’s brilliant. They love asking me questions about my career and I’m more than happy to speak about it and my experience of it.”

David can level with the lads and let them know that being a professional football player can be tough and also boring at times, but ultimately it’s just great to be able to play football every day. Finally, David starts to talk about his hopes for the season ahead and the kind of work he intends to do with the squad when they come back after the summer holidays. He is keen to do more speed, agility and quickness work with them, but is also keen to introduce video match analysis sessions:

“I’d like to involve more analysis sort of stuff as well. We can watch a game, we can maybe get it videoed, we can look at it after together as well.”

David wants the structure of the working week of the IHM football academy to mirror that of a professional academy from September. There is clearly a lot to look forward to in the new academic year and David gets the opportunity to run things his way and make some training innovations that he believes in. It’s going to be a full on year ahead!

To join us at IHM Football Academy and be the best you can be go to: www.ihmanchesterfootballacademy.com