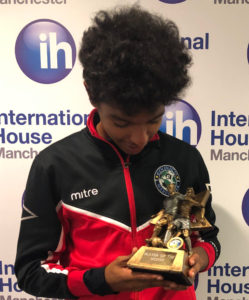 Hatim aged 18 years from Canada is approaching the end of his course with us here at IHM Football Academy. He began his course with us back in July when he originally took the 2 week summer “Talent I.D. Programme”. And since then has gone from strength to strength.

Hatim was awarded the Player of the Month award for September due to his consistently positive attitude, leadership and contributions to games. Hatim has made at least 5 goal assists during matches so far since this season.

“Hatim seems to be really enjoying himself. Probably overall he’s the best player in the group. He gets on well with all his team mates and I made him Captain of the Senior Squad.” said Head Coach, Matt, with pride.

In addition, Hatim has received the Man of the Match award numerous times, so he has really stood out in a very positive way. He has also attracted the attention of the scouts during the recent October Showcase event and is being tracked by a couple of pretty substantial local league clubs.

What is clear is that Hatim has enjoyed his time at IHM and has embraced every aspect of the course from host family life to his academic studies and when asked for his own opinion on his stay in Manchester immediately enthused:

Hatim initially enrolled with IHM onto the Talent I.D. programme. Find out how you could demonstrate your talent and get a full assessment of your football potential on this 2 week summer programme.