“The chances of coming here, playing games, being spotted and getting into a club.” 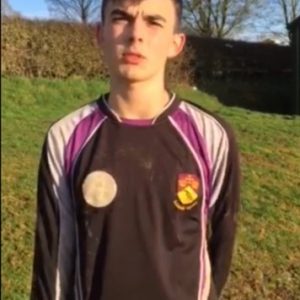 Seb is aged 15 years and comes from Abu Dhabi in the UAE. He has been enrolled on the Ellesmere College football academy programme since September 2018. Clearly the weather during the UK winter is in stark contrast to what Seb is used to back home, but looking at the mud on his shirt, it is clear that he is enjoying the chance to play on a grass pitch for a change!

He is very clear what his objectives are when asked why he decided to come to IHM at Ellesmere College by Head Coach, David:

“The chances of coming here and playing games. being spotted and getting into a club.” are Seb’s goals right now.

With this in mind, Seb has already booked his place on the IHM Football Academy Showcase Event in Manchester city centre on Wednesday 17 April. This is a chance for young players aged between 11 and 24 years to impress the many scouts and pro club coaches who will be in attendance. Successful candidates will be invited back to train and trial with any club that expresses an interest in them after the event. We wish Seb well at the event and look forward to following his future success and development as a player.

When asked what has he found to be the biggest difference between playing in Abu Dhabi and in the UK, Seb is also clear:

“Technically and tactically it’s a lot more demanding in England than it is in Abu Dhabi.”

Seb welcomes the well-structured football coaching that he receives at IHM at Ellesmere College and appreciates that what he finds here is more physical, tougher and more tactical than that he experienced back home in Abu Dhabi. A challenge which Seb clearly welcomes.

When it comes to why he is here Seb is equally sure, but like all IHM student players, has a well-thought out Plan B:

“Obviously, I’d like to go pro. But if not I’d like to get into coaching or managing, staying involved with the game.”

All IHM players are encouraged to start to reflect upon the possibility of their football career coming to an end and to begin to formulate an academic pathway to an alternative career they would like to aim for should they not make it as a pro. The IHM approach is open and honest and focuses upon managing expectations from the start.

If you want to join Seb and follow your football dream, please read more

David Raven is Head Coach at IHM at Ellesmere College:

“David Raven has enjoyed a 14-year career as a professional footballer representing clubs in England and Scotland. As well as playing in the English Premiership, the Scottish Premiership, League 1 and League 2, David has competed in Europe and in cup finals, winning the Scottish Cup final in 2015 with Inverness Caledonian Thistle.

He started out as a centre back playing youth football for Tranmere Rovers, before moving to Liverpool in 2004, where on the advice of first team coaches, he first started playing full-back, a position he made his own when he moved to Carlisle in League One in 2006. Following stints at Shrewsbury Town and Tranmere he was signed by Terry Butcher at Inverness. At “Caley” David finished runner up in the Scottish League Cup in 2014 before winning silverware 2015, a year in which they also came 3rd in the Scottish Premiership.

In his time with the club he also started his coaching journey, gaining his UEFA B in 2015 and his A licence in 2017 and training the clubs underage teams. Moving south in 2017, David played at Wrexham and continues to turn out for Warrington Town in the Northern Premier, and as well as coaching with IHM, he has coached at Wrexham and Everton. As a coach,

David works to ensure players have the belief, desire to win and self-discipline needed to represent themselves and their team with distinction on the pitch.”