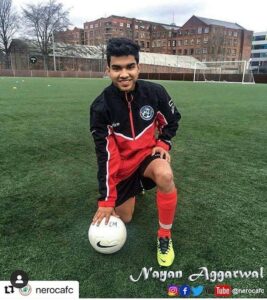 21 year old Nayan, from India, was an IHM student player who left a lasting impression on all who met and worked with him. We always knew that he would achieve great things. And he didn’t disappoint. Now Nayan is over the moon to have signed his first professional football contract with Neroca FC, based in Imphal, India. Neroca play in the 2nd Division of the I-League.

“It is an unbelievable feeling as I sign my first professional contract and a dream come true for me and my family.” enthused the driven young player earlier today.

“I am excited to see what’s coming and will give my best.”

Nayan was always very humble and paid close attention to constructive praise he received from his coaches. He paid tribute to all those, including IHM Football Academy who have helped him on his way.

“I am thankful for all the people that supported me in my football career so far.”

After studying and training with IHM Football Academy Nayan made his debut with Chanthaburi FC in Thailand. He has worked hard to perfect the technical side of his game and now all his hard work has paid off.

IHM Director of Football, Mick Brennan, was not surprised to hear Nayan’s news:

“Nayan’s football journey has been incredible to watch. He is a perfect example of how dedication and consistent hard work and persistence can lead to good things. Well done Nayan. We always knew you had what it takes!”

Everyone at IHM Football Academy joins together to wish Nayan the very best for his future professional playing career. Be sure, he is a player to watch!

If you would like to take your game to the next level, contact us at IHM Football Academy now: peter”ihmanchester.com