“My knees were quivering, I was terrified, but it was one of the best days of my life!” 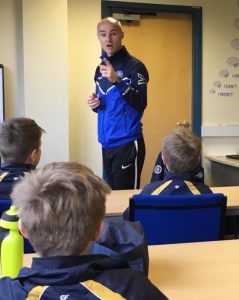 David Raven, IHM Head Coach at Ellesmere College, describes the day he made his debut for Liverpool, the team he’d been a fan of all his life:

“When I was your age I started getting recognised by the scouts. I was playing for my Sunday League team and my local school team. And then my phone started ringing on Sunday night; Do you want to come and play for Man City? And Liverpool was another. Being a Liverpool fan, I couldn’t turn it down.

I made my debut against Tottenham Hostpur down at White Hart Lane in front of 45,000 people. My knees were quivering. I was terrified, but do you know what? It was one of the best days of my life.”

On Wednesday this week IHM at Ellesmere College hosted a squad of young Year 6 players from Presfelde school. The group visited the academy today as part of a drive from IHM academy & Ellesmere to raise awareness in the local area of the football academy set up and reach out to the local schools.

The Presfelde team came along in the morning for a talk, delivered by David Raven, followed by a coaching session and lunch. The Prestfelde team have performed well this season and have reached the national finals for football in their age group. The IHM instilled the need to believe and to give everything they’ve got in order to go on and be successful in the final later this year.

The morning started with an overview of the academy and a talk by IHM Academy Director, Michael Brennan. Mick set out the values that IHM seeks to instil in its players, along with its strong ethos of giving equal importance to a player’s academic development and achievement as well as that on the pitch. Today’s football players must work towards defining a clear academic pathway and so be ready to follow an alternative career, should their own professional playing career be suddenly cut short through injury.

David then spoke about his role at the IHM football academy and his career as a professional player. David regaled some fascinating tales including playing against Ronaldo as a young player, scoring the winner in the Scottish cup semi-final for Inverness Caledonian Thistle and playing alongside and rooming with Wayne Rooney as a young England player. The young players were understandably transfixed and David’s talk soon prompted lots of enthusiastic questions from them all.

David provided some excellent advice to the boys to help them on their personal journeys to becoming a professional football player: 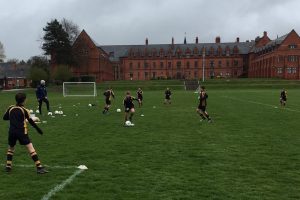 The team did a training session both with Mick Brennan & David Raven. Mick warmed the lads up and did a short ball skills session, then DR went on to do a passing and receiving session. Mick then carried on and did some work with the Goal Keeper. The level of play and attitude towards training form the players was excellent.

At the end of the session David told the squad:

“That’s a great start for young players like that, as a coach you can work with that, attitude is everything. If one or two of those chose to progress onto the academy here at Ellesmere in the future, it would be great to work with them and really give us the opportunity to  help them be successful in the game.”