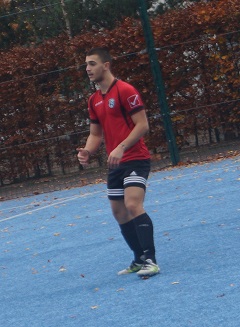 Michel Bou Farah studies and trained with the IH Manchester international Academy during the 2014/2015 & 2015/2016. A dedicated player and student Michel was always one to work hard and try to improve by that small percentage each week, his aim was to make a career out of the game and sport.
Now, just 6 months on from completing his course with IH Manchester Michel has returned as a guest player and a role model to the other students on how the programme can make you successful.
Michel has progressed onto University with Manchester metropolitan studying Sports science, but has also been signed by semi-professional side Lancaster City.
Michel’s Academic progression came from the two years with the academy studying the BTEC in sport. Michel was always focused on his football but he was aware he always needed a backup if his football career didn’t take off, so worked hard academically and achieve excellent results to enable him to progress onto university with his BTEC qualification. Now studying in Manchester as a first year university student Michel has many option open to him in the field of sport once he’s completed his course.
In football Michel has earned himself a contract with Lancaster City FC. Lancaster City coaches saw Michel at one of the PFA guest sessions that he was involved in during his time at the academy. Following this session the Lancaster city, and other semi-professional clubs, invited Michel in for training and further trails. Lancaster city were the side that won his signature, signing with the clubs Under 21’s side and featuring regularly for the team, breaking into the first team on occasions already this season.
Talking to director Mick Brennan this week when Michel returned as a guest Michel said “I owe everything I have in football to the IH Manchester programme. It has provided me a platform and an opportunity to progress in the game. The overall experience was fantastic, it allowed me to become more independent, living with my host, living away from home and having to work hard every day. I receive a great education which has meant I can progress onto university but mainly for me the structure and dedication in the football training at the academy has meant I can progress as I have. I would recommend anyone wanting to improve and give football a go in the UK to come to the programme, it offers so much”
Michel continues to represent Lancaster City at U21’s and is doing so successfully this season, he’s also progressing well at university and in a fantastic role model for young athletes everywhere.

Mick Brennan, director of IH Manchester said “We are all delighted at Michel’s progression both in football and academically. In the time he spent with us on the programme he was dedicated and hard working in everything he did, he got a few knock backs at times but never gave up and was always positive. He was a great role model at the time for the students and players to follow but to now have him coming in, meeting the current players and sharing his success with them is fantastic. I know he has ambitions of progressing higher through the football leagues, and with his dedication and drive he will make it. We are very proud of his achievements. Well done Michel.”