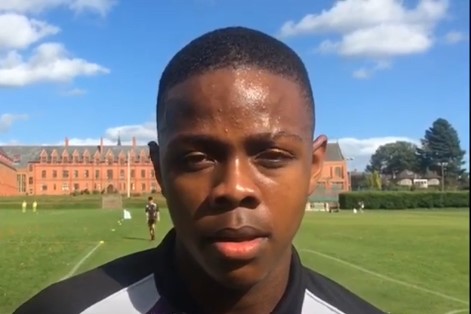 All through his school summer holiday, McDonald has been training hard. He has come back much fitter and is ready for the new season ahead. McDonald has been training with the Notwane Football Club first team, back in his home country of Botswana, and has wasted no time in trying to improve his game. Notwane FC is a football club from Botswana, based in the capital city, Gaborone. It is named after the Notwane River. The club play in the Botswana premier league.

The coaches at Notwane had been able to follow McDonald’s progress at IHM at Ellesmere College last year and so invited him to train with them whilst he was home over the summer. McDonald embraced the challenge that this opportunity presented him:

“The standard was very high because I was playing with people much older than me. There was a lot on the line. The players were playing to win the league and I had to try and adjust to it so I could be part of the team.”

McDonald feels sure that his first year with IHM helped him a lot to adapt to the level of football which he has experienced this summer. He also gives credit to his coaches for preparing him for this big step up.

Looking forward to the new season ahead, McDonald says that his objectives remain the same as before; to continue to improve as a player and to take his football to a higher and higher level.

The staff at IHM heard some very positive reports about McDonald’s performance over the summer and so can’t wait to see what he manages to achieve this year.

Follow the link to watch the full interview with McDonald – https://youtu.be/QWC4zIwF6Ac  ”