League Campaign Ends on a High 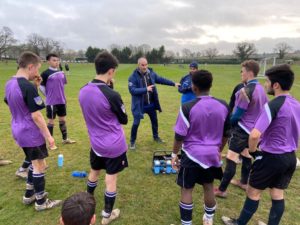 The football academy played their final game of the league season and finished it off brilliantly, beating Thomas Telford 4th XI by 7 – 2. In very tricky conditions, with a gale force wind to compete with, it made for a game of two halves. Despite the conditions, Ellesmere dominated and created plenty of chances, however they found themselves 2-1 down at half time. The second half was a different story, and assisted by the wind, Ellesmere made the pressure count and ran out comfortable winners.

It’s been an excellent first season in the Shropshire league, in which every player has played a vital part. We should find out the final league position in a couple of weeks, but either way, this season has been something to build on.

David Raven, Head Coach, Said ” it was a great performance today and a great win. it just shows how far these boys have come. They have done fantastic in this first season in the Shropshire league, not forgetting that as a team we have a very young side in comparison to all the other sides. That gives us something to build on for next season if we can keep this squad together going forward. well done boys”