“I’ve trained with the first team at Airbus, which was good” Will’s Story… 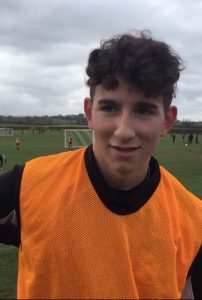 Initially Will went for a county trial and must have impressed as he was selected for the u16s squad. He played county level football for the rest of that season and went down to Cardiff to play in a national county tournament tie. This year has started even better for Will as he has been selected for the FA u18s squad.

“The academy seems to be able to progress quite a few players, technically, both on and off the pitch.”

In fact Will started to get noticed more and more and was then selected to play for Welsh Premier League club, Airbus UK Broughton. Will attended a trial with the Wingmakers last summer, with a full academic year of IHM football academy training under his belt and was selected for the u19s and u23s squads and has played for the club regularly since then.

“I’ve trained with the first team as well”, enthuses Will, “which was good.”

Will believes that his improved understanding of roles, both on and off the pitch, as well as the technical gains that he has made at the IHM football academy, have helped him a lot.

“Technically I think that I have improved quite a lot with the academy.” he modestly affirms.

Looking to the future, Will has been weighing up his choices with his parents of late. He’s considering going to university in the UK and playing semi-pro football. However, he is also keen to explore the value of travelling to the USA for a soccer scholarship. We wish Will all the every best and feel sure that his strength of character, engaging manner and work ethic will guarantee him success whatever path he chooses.

If you would like to progress your game like Will, read more about IHM Football Academy at Ellesmere College here