“It’s just a nice experience. It doesn’t feel like I’m away from home.”

The first I heard from Elijah, aged 16 years who is French, living in Nairobi, Kenya, was when he emailed the office to ask for more information about the IHM Football Academy football boarding school programmes. I was impressed. He wrote coherently and intelligently and expressed himself so well. As always, I immediately replied to thank him for contacting us, but as he was under 18 years old I would need to communicate with his parents, too. Elijah’s father emailed back to confirm that he approved and allowed Elijah to lead the correspondence between us all. I recognised that this was a mature and confident young man, an opinion that was confirmed when I eventually met Elijah and his parents at our first Skype interview. On reading his school reports and football coach’s reference, it quickly became evident that Elijah would be an excellent addition to the IHM Football Academy squad. 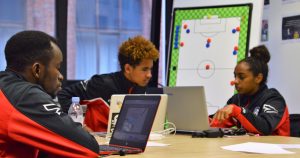 I had checked and sent out all the progress reports to parents just before the Christmas break and so could see how well Elijah was doing. He had already achieved excellent marks in his first course, the BTEC Level 3 Sub Diploma in Sport Performance.  This wasn’t surprising as Julie, our Welfare & Accommodation Manager often commented on how hard Elijah and his classmates were working on their assignments after training. The Sub Dip is the equivalent to one A level. However, it was the first week back after the Christmas and New Year holidays when I finally met up with Elijah face to face. His interview was great because it reinforced just how well he had taken the opportunities given to him at IHM, both in class and on the pitch. Elijah is now well into his next academic course, the BTEC Level 3 Diploma, which is the equivalent of two A levels. He is due to complete this by June this year and is aiming for the maximum marks. I don’t doubt that he will achieve his goal.

Elijah’s analysis of his time at IHM Football Academy to date rings true:

“Everyone on the team are good mates. We have fun, while working hard.”

It’s hard for parents to say good bye to their children as they leave them at their school on the other side of the world from home. But, Elijah and his parents were greatly reassured when they met the hosts Marian and Stephen. Marian and Stephen live in a big house with their adult daughter Helen. Marian works part-time as a nurse, Stephen is retired and Helen goes to university. So, rather than being alone in a school dormitory, Elijah was joining a ready made family. He talks fondly of his hosts and how well they look after him:

“The (homestay hosts) family’s been really welcoming. They’re always checking up on us. It’s just a nice experience. It doesn’t feel like I’m away from home.”

If you think that you’d like to do what Elijah has done and continue your education whilst you train hard to follow your football dream, then contact us now: [email protected]