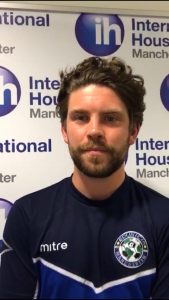 We recently caught up with IHM Head Coach, Matt Lowe, to hear his thoughts on how the squad have performed as the season begins to draw to a close. Here Matt not only  shares his views on progress over the year, but also provides a valuable insight into the work he and the coaching team carry out at IHM.

“With the season coming to a close, we’re still working hard with high intensity training sessions. We have organised friendly games against other teams in similar positions to us. But, most importantly now is about keeping the lads motivated, to want to do well. But, me and the other coaches are maintaining a high level of expectation for the players.

The level of football still needs to be at a high level and that will continue right until June.

The highlights this season has been the game programme. The boys have done very very well against semi-pro club opposition. We’ve had Macclesfield Town, their development squad. We’ve played Mosley FC. We’ve also played Fleetwood Town. The boys are a credit to the academy. Mixed results, done well in some, some needed improvement. But, overall the level of of attitude, but the football most importantly has been of a high standard. The standard of football over the last two months has definitely improved.

It’s a credit to the other coaches who have been supporting the boys (Frank Sinclair, Jon Macken and David Raven). We follow the coaching plan as best we can that ensures we have all the technical stuff, the physical demands of the game and also understanding of the game, which is also important. Some of the boys, since they’ve started off, have massively improved over the course of the year. That’s a credit to everyone that’s involved in the academy.

From the Showcase Event (17th April) we’ve had some of the players called back to some of the semi-professional clubs. We’ll be preparing them in terms of saying this is what’s expected at a higher level of football than that they currently might be playing. They’ll be up against physical boys, they’ll be up against lads that have played at that level for a bit of time. Their standard of football will be at a very high level.

So, we’ll be trying to do sessions, as I said earlier, of high intensity, playing minimal touches when possible. I’m really giving the boys who’ve been recruited to go to the pre-season programme the best possible chance of signing.

Right from when we started, the standard of football has just been getting better and better every session. The attitude of the boys has been brilliant and it’s been a credit to be past of it, yes.”