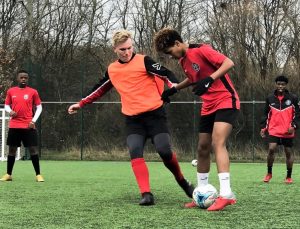 Tom from South Africa has been with us at IHM since January and since then he has fitted in just fine. Tom was looking to be challenged as a player and to be able to take his game to the next level. He reported that as his prime motive when we first interviewed him shortly after he arrived. He remarked then about how impressed he was with the level of coaching that he was enjoying in Manchester, compared to that he was used to back home. By now, Tom has fully engaged in the daily life of the IHM Football Academy and is an integral part of the team. When we caught up with him at the beginning of the Easter period, he was equally keen to enthuse about the work he was doing as part of his BTEC Level 3 Sub Diploma in Sport Performance.

Head Coach Matt, a qualified teacher and Sport Science honours graduate as well as a UEFA qualified football coach, leads the classroom work each morning as well as the football coaching each afternoon. This means that Matt is ideally placed to ensure that our young players see the relevance of the theory that they cover in class to their training on the pitch. It was this that Tom remarked upon as he spoke about how much he has been enjoying his BTEC work of late:

“I’m busy doing how exercise affects the body. And we did a test the other day where we went to the gym and we did it so we had actual stats on ourselves. And then we’re going to research it and back it up with other statistics.” 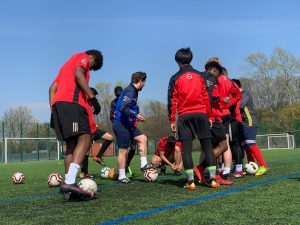 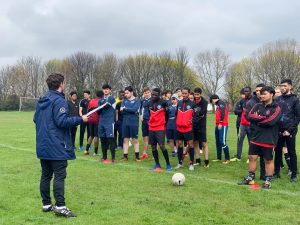 But, it is a really common question, from both players and their parents, that Tom asked himself as he embarked upon his time with us at IHM:

“I wanted to decide whether I loved football enough to take it to the next level. If I wanted to pursue it as a career. And also to get new experiences, get better training, because where I’m from we don’t get as good training as we do here.”

It’s great to hear Tom so emphatic about how he feels that he is achieving his personal objectives. You can watch his full interview here.

So, finally, what exactly is the BTEC course all about?

This is a question that we are often asked by both prospective players and their parents at the enquiry stage. The BTEC is the least understood of the different academic routes that we offer our players at IHM. However, it is often the most relevant and appropriate one. We’ll try and clarify below exactly what is covered on the BTEC courses, how the modules relate to actually playing and training and explain what is the value of the various BTEC qualifications as far as helping our players progress to Higher Education and beyond. The table below shows the equivalent value of the different BTEC qualifications taught at IHM Football Academy, how long it takes to complete each one and what academic progressions each one can lead to:

The modules covered at Sub – Diploma are as follows:

Unit 1   The Principles of Anatomy & Physiology in Sport

Unit 2   The Physiology of Fitness