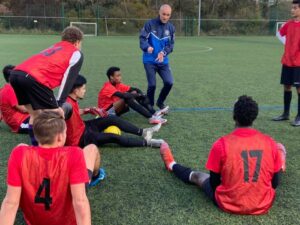 We are extremely proud to announce that senior IHM coach, David Ravening, will be playing in the FA Cup 1st Round, streaming live on BBC television this weekend! David plays for Marine AFC and his team were drawn against Colchester United in the match which kicks off at 3pm on Saturday, 7 November.

David, 35, is a highly experienced central defender, with a wealth of Football League and Scottish Premiership appearances to his name. He began his career at the Tranmere Rovers Academy before joining Liverpool in 2004, making one Premier League appearance for the Anfield club in a two year stay. A move in to the Football League followed making a total of nearly 200 appearances between Tranmere, Carlisle United and Shrewsbury Town. David then moved north of the border for a six year spell at Inverness Caledonian Thistle, the majority of his 153 appearances coming in the Scottish Premiership. David moved to Marine AFC in the summer of this year.

As a UEFA A qualified football coach, David is a key player in the IHM Football Academy coaching team. His wealth of professional player experience inspires our young international players on a daily basis. We wish david all the very best for the game this weekend and will all be cheering him on come Saturday.

If you would like IHM Football Academy to take your game to the next level, take a look at how to join us: