As the new term begins, Head Coach, David Raven, reflects on the challenge of helping his players find their fitness again after the 4 week holiday break.

They will soon need to be on top form as they face a relatively testing term ahead, no more so than in the league. After a relatively easy start, the team are facing tougher opposition as they progress through the league games now. This makes the games more worthwhile, but stretches the resolve and determination of the young players as they begin to face much more challenging opposition. However, David is upbeat about the squad and believes that they have made a good positive start to the new term. Despite losing against Shrewsbury 2nd Team in the last minute, David felt the team had played well.

“Performance wise they were really really good and everyone’s in good spirits.”

This term is packed with football opportunity as the players get the chance to represent the school every Saturday as well as playing in the IHM team in the League each Wednesday.

“It’s a good term this one, it’s an exciting one and we’re working well.”

David is going to be working hard on rebuilding the players’ fitness this term and then revisiting first principles as he gets the lads back to maintaining their shape when playing, by using small sided games. David names his stand out players, highlighting those to watch and looks ahead with relish. Glenn gets a special mention as he’s consistently been scoring goals last term, 13 or 14 at the last count. Leo Buckle and Max Moater are also playing well at present. Younger players like Shiva, McDonald and James Prescott have also impressed. David also gives praise to Shaun and Koki, younger players who have recently stepped up to the older category.

If you would like David to help you take your game to the next level, then come and join us at IHM. We have a full range of Football + Education opportunities available. 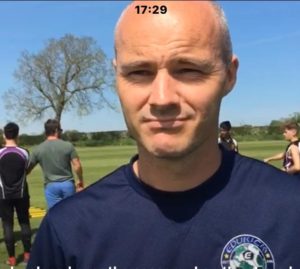