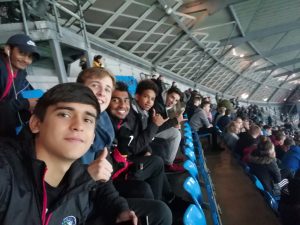 It has been a rather busy and eventful first term for the IHM Football Academy squad.

I have set out some of the highlights below. Please do let us know any feedback that you or your son has regarding this term. I am very keen to take on board everyone’s views at this stage, so that we can continue to improve the IHM Football Academy experience moving forwards into the new year.

1st game of the season for IHM Ellesmere College Football Academy saw them run out 5 – 0 winners against a good Lakelands team. Goal scorers were Saranpagpeny Pagadala,Will Mullock, Dev Marini and 2 from Glen Senuabeh.

Goals from Serio Ehlis, Glenn Senuabeh and Tom Jones amongst the scorers. “We took 2 players off and played ‘2 touch only’ for the second half as we didn’t want to embarrass anyone as that’s not football as I see it.” said IHM Football Academy Head Coach, Chris Morrell .

3rd game saw Academy vs Gobowen – This match was played on sand based astro, which wasn’t ideal, but a good contest saw the Academy run out 3 – 0 winners. Goals from Max Molzter and Glenn Senuabeh (2)

4th Game saw Academy vs Wrekin College U18. A strong Wrekin team twice took a lead before we ran out 6 – 2 winners. Sunuabeh, Mullock and Marini amongst the goals in a very good 2nd half performance.

IHM appointed Chris Morrell as Head Coach at Ellesmere College during the summer out of season. Chris has already made an impact with the squad. Chris has a wealth of experience in football, especially in the area around Ellesmere. Currently undergoing his UEFA A coaching licence with the Welsh FA, Chris comes to us from his previous role at Salford University, where he led the football programme and coached the men’s first team at the university. As well as this, he has recently been working with a number of local clubs in the North Wales area. Taking on this leading role at the academy, Chris can draw upon his time in the Welsh Premier League as Assistant Manager of Llanduno FC and heading up the academy at Prestatyn Town.

Joey Bilotta met Roberto Navajas when they were both rookie players, right out of university, with a Spanish professional club. The two players then went their separate ways but each forged careers in professional football. Roberto went on to become Goal Keeping Coach with La Liga club, Real Sociedad, working with the them when they took on Manchester United at Old Trafford in the Champions League in the 2013-14 season. Roberto and Joey recounted their experiences of life after professional football describing how they have now made football their business. Roberto then worked with the Ellesmere goal keepers in a master class session.

David Raven has enjoyed a 14-year career as a professional footballer representing clubs in England and Scotland. As well as playing in the English Premiership, the Scottish Premiership, League 1 and League 2, David has competed in Europe and in cup finals, winning the Scottish Cup final in 2015 with Inverness Caledonian Thistle. David qualified as a UEFA B coach in 2015 and gained his A licence in 2017. As well as coaching with IHM, David has coached at Wrexham and Everton. As a coach, David works to ensure players have the belief, desire to win and self-discipline needed to represent themselves and their team with distinction on the pitch. We are delighted to announce that David has just accepted a coaching contract with IHM at Ellesmere College and joins Chris as a regular member of the coaching team.

Presentation on US soccer scholarships by Tyrelle McLeod-Bentley

On 5th December, both the IHM Ellesmere College and IHM Manchester city centre squads enjoyed a presentation by Tyrelle McLeod-Bentley from Soccer Assist USA. Tyrelle set out all the different options for playing top quality football on a college or university scholarship in the USA. It was exciting to learn how many US educational institutions offer young players the opportunity to fund their studies whilst playing soccer at the top level. For many young players this sees the launch of their pro football career.

Tyrelle then watched and assessed the players in an eleven a side match which saw a team from each squad compete. He was impressed by the level of football that he observed and has called back 5 Manchester and 2 Ellesmere players for a further scholarship trial. Following the game, Tyrelle gave an hour long presentation and Q&A on the routes into the USA and how he can work with players to help them to achieve that dream.

Visit to and tour of the Etihad Stadium – Presentation by UCFB

In November the squad joined the IHN Manchester city centre squad for a tour of the Etihad Stadium, home of Manchester City FC. They also attended a presentation by UCFB at their Etihad Campus. UCFB offer a variety of football industry related undergraduate and post graduate degree courses such as; Football Business & Finance, Sports Journalism, International Football Business etc. This provided a very useful insight into academic pathways into football related careers and was well received by all players in attendance.

Players from both the Manchester and Ellesmere sites were joined by local players at the event. 50 players in total showcased their ability in front of invited scouts and club representatives.

All the players were put through their paces in the morning sessions, showing their ability to be coached, to listen and their attitude to training. Following a short break it was onto match play. The game was a high standard with lots of ability on show, impressing the on looking scouts. From our showcase days in the UK we’ve had several successful call backs to clubs over the past two years.

On Saturday the IHM Ellesmere College squad visited Ewood Park, the home of Blackburn Rovers FC as they took on Championship visitors, Sheffield Wednesday. Mid table Rovers were on a good run of results and so their 4-2 victory confirms their promotion ambitions to Premier League status. The match was action packed with a stand out display from veteran player, Danny Graham whose hat trick sealed the deal to bag 3 points to the home side. This was a great day out for the Ellesmere College squad and allowed them to take in some top level English football amongst the 15,000 fans present on the day.

Player of the Month Awards:

Most players have also participated in several Football workshops including: Data Analysis & Collection, Devising Set-Plays and Match Analysis of the Real Madrid vs Barcelona fixture. All players have had the opportunity to present their findings in front of the group, with some using tactic boards and data.

We have also had a an indoor football competition every Friday which the players have loved.

“Most players have certainly bought into what we are trying to do with the Academy this year. Individual and collective development has improved considerably in the past few months.

I have tried to fill the programme content with a variation of activity to educate the mind as well as the body, both on and off the pitch and to keep players actively engaged throughout. . We offer Football Coaching, Football Courses, Football Training

I must say on the whole, the players have worked really hard and are buying into what we are looking to do at the IHM Football Academy.”

We wish you all a very merry Christmas and all the very best for the coming new year. 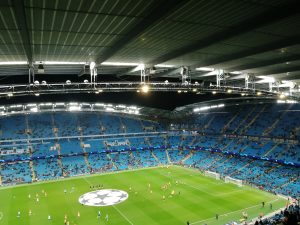