“IHM appeals because it offers a professional football experience whilst also being in school.” 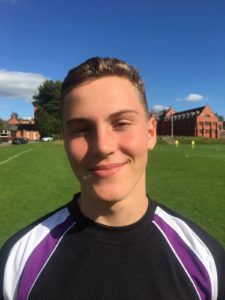 Leo Buckle was born in the Ukraine. His mother is Ukrainian and his father is British, so, in his own words he is “half and half”! Leo has spent the first 16 years of his life in the Ukraine, but he has recently moved to Ellesmere College boarding school to continue his education. Leo chose Ellesmere College because of its excellent reputation and also because he was able to enrol at IHM Football Academy whilst there. He wanted to be able integrate his football training closer into his academic studies.

Leo is serious about his football and wants to make it as a professional player. It wasn’t possible to do this back in the Ukraine, so he’s delighted to have the opportunity now that he’s arrived at Ellesmere College. He is quite clear about his goal:

“Well, my goal throughout the programme is to get into a team or club in the UK. Hopefully sooner rather than later and I’m trying to play at the highest level possible.”

Being part British, Leo has always felt more comfortable speaking English rather than Russian, so he will find studying at Ellesmere a joy.

“I wanted to pursue football, but also finish my education, which is something my parents were pushing strongly.”

The IHM academy allows Leo to give his football his best shot without compromising his education. This is why IHM appeals to both student an players alike:

“IHM appeals because it offers a professional football experience whilst also being in school.” “Here football and education is synced. So, I’m able to do both at the same time.”

Leo found that he also wasted a lot of time back home, travelling between school and football training, with a lot of unproductive down time in between. Back home he had to travel a lot.

He is now reflecting on his first few days’ training here at IHM Ellesmere College and has already noticed a difference.

“I think that the standard is a lot higher than I expected.”

Leo is just excited to be here now and to be part of the squad and already he has made a positive impression on Head Coach, David Raven. During the team’s recent victory in their first league match of the season, Leo was picked out by David for praise:

“A stand out performance was Leo Buckle, who dominated the game.”

We all wish Leo the very best for the season ahead.