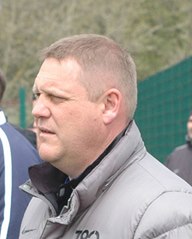 Last Wednesday the IHM squad had a visit from a very experienced coach / educator from the PFA.

The Professional Footballers’ Association (PFA) was formed on 2nd December 1907 and is the world’s longest established professional sportsperson’s union.

The aims of the PFA are to protect, improve and negotiate the conditions, rights and status of all professional players by collective bargaining agreements.

The PFA has been successful throughout its history in the challenges it has faced due to the strength of support from its members.

In 1978 a player’s right to move at the end of his contract was fully recognised with a more efficient procedure being established. An Appeals Committee with an independent chairman was set up to consider disputes arising from the question of a compensation (transfer) fee and the PFA is represented on this committee.

Iain is a former England Schoolboy International who also represented England at Youth level before signing for Ipswich Town.  He then played for Walsall before finishing his career at Telford United where he played in two FA Trophy Finals.

He has been Centre of Excellence Manager at Shrewsbury Town and was employed as the Football League Development Officer for Telford and Wrekin Borough Council.

Iain has been a PFA Coach Educator for the West Midlands since 2011 and has been qualified to deliver L2 CCF and UEFA B Courses since 2002.

Iain first of all spoke to the IHM squad at Ellesmere College about his past career in football as a professional player and his current work with the PFA. After this initial classroom based session, Iain led a coaching sessions with the boys out on the training ground. It was an incredibly motivating and inspiring afternoon for these young players and another valuable coaching session with such a well-respected, experienced and highly qualified football coach.