“I want to make a professional career out of football.” 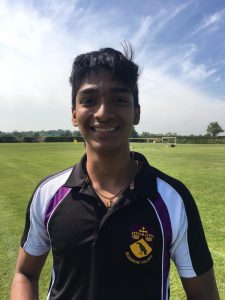 Saranga is studying for his A levels in Year 13 at IHM Football Academy at Ellesmere College. He has been training with us for two years now, since the start of the academic year in September 2017.

Saranga knows exactly what he wants and how he needs to get it.

Tapping into IHM’s partnership with “Soccer Assist”, working with Tyrelle and Liam, Saranga has been able to obtain a good soccer scholarship, allowing him to subsidise his studies, in his chosen subject, with a good U.S. college.

He has gained entry to a D1 programme at junior college level which will allow him to start to play soccer at NCAA level. He’ll then play at college level, get his associates degree after two years and then try to get a Bachelor’s degree from a D1 university.

Saranga has done very well. At the Division 1 level, you find the best football programs in the USA. Division 1 football teams are characterised by their rigorous schedules, and football is almost full-time job on top of the student-athlete’s academics.

D1 football has a high profile in the USA, with TV coverage of bowl games reaching households across the country. However, student-athletes who play on these teams have to be prepared to put in a lot of work. If a player has the talent and love of the game, just like Saranga, D1 football is a perfect fit.

Saranga firmly believes that his two years full-time at IHM will help him to do well in the USA. He believes that his exposure to the English style of play will give him the edge over players who may not have played over here.

“The English style of play is very physical, very quick. So, I think that I’ll have the edge over the American players, considering I’m used to the game they play over here.”

However, Saranga does acknowledge that he is still going to have to work harder and get fitter in order to compete at this level.
But, he does feel that the IHM academy has given him a solid foundation upon which he can now start to build:

“It has given me the ability to develop that physical aspect of the game. Play quick, make quick decisions.”

There are many routes available to young players who are determined to try and make a career our of football. At IHM we help ambitious young players to make the best choices for them as individuals. To give young players every chance to take their game to the highest possible level without compromising their academic education and so keeping their options open whatever the outcome.

“I want to make it a professional career out of it (football). So, the next step for me is to get a decent education while focusing on my football.

So, I think going to the U.S.A. will be a good progression.”