“How Much Straightforward Running to We Do In Football?” 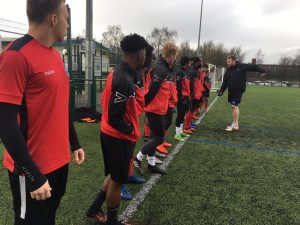 “The Limits Of The Beep Test”

When Oli Suart, British Cycling coach, was working with the squad earlier this year, he simulated the work rates of competitive match play at the highest level eg. Premier League. Oli referred to the beep test and how it can only ever measure aerobic fitness in an individual player. Whilst this is useful, it doesn’t give a full picture of a player’s fitness when playing a full competitive match.

What is the Beep Test?

The multi-stage fitness test, also known as the PACER test or PACER (Progressive Aerobic Cardiovascular Endurance Run), the 20 m Shuttle Run Test (20 m SRT), or the beep test, is a running test used to estimate an athlete’s aerobic capacity (VO2 max). In the test, athletes must run from one line to another before a timed beep. Athletes must continue running back and forth, each time reaching the line before the next beep. Once one can no longer run, the test is over and the number of laps is recorded. As the test continues, the time between beeps gets shorter. The beeps help young athletes develop a sense of pace. Inexperienced runners often complete a race and still have energy left. With the PACER, runners continue until they have no energy remaining, ensuring scores reflect cardiovascular fitness over pacing abilities.

The test is used by sporting organisations around the world along with schools, militaries, and others interested in gauging one’s cardiovascular endurance, an important component of overall physical fitness. The “Beep Test” is part of the most applied health-related fitness tests used.

How does it work?

The test involves running continuously between two points that are 20 m apart from side to side. The runs are synchronised with a pre-recorded audio tape, CD or computer software, which plays beeps at set intervals. As the test proceeds, the interval between each successive beep decreases, forcing the athletes to increase their speed over the course of the test until it is impossible to keep in sync with the recording (or, on extremely rare occasions, until the athlete completes the test). Many people who test people using the multi-stage fitness test allow one level to beep before the person makes the line, but some middle and grade schools allow two missed laps. If the person being tested does not make the next interval, the most recent level they completed is their final score.

The recording is typically structured into 25 ‘levels’, each lasting around 62 s. Usually, the interval of beeps is calculated as requiring a speed at the start of 8.5 km/h (see format table), increasing by 0.5 km/h with each level thereafter. The progression from one level to the next is signalled by 3 quick beeps. The highest level attained before failing to keep up is recorded as the score for that test.

Oli’s point? Whilst the Beep Test is valid to measure aerobic fitness and endurance, just how aligned to the realities of competitive football match play is it? In a game do players simply run backwards and forwards as they do in the Beep Test? Of course not. They have to jump, drop down, twist round, turn and speed up and slow down. In short, a good Beep is no predictor of match day stamina. So, we have to train in way that simulates how we play. Train to get better at the activity sequences top level players must go through to win.

This is the difference between winning and losing at the top level.