Sergej is age 16 years old and comes from Kiev in the Ukraine. His dream from being a young boy was to play for Manchester United.

“When I was young I dreamed to play here in Manchester.” 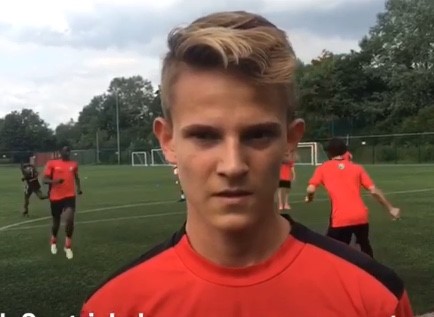 Sergej was always a highly motivated student player. Even before he arrived in Manchester he was very enthusiastic about his opportunity to train, play and study at IHM Football Academy. And he has grasped every chance that has come his way whilst he has been here.

Sergej and his parents are currently assessing the possibility of him studying with IHM full-time from September and completing his education with us here in Manchester. That would allow him to study each morning and attend IHM coaching every afternoon. The advantage of him being in Manchester longer term would be that he would have a greater chance to also join a local club and start to train and play with one of their teams. Once players start to play regular league football, at whatever level, they can be noticed and have a chance to stand out from the rest.

The summer Talent I.D. programme at IHM was an ideal introduction for Sergej and highlighted all the ways that the academy can help him to take his game to the next level. He has already noticed a difference in the level of football coaching that he has received since being at IHM compared to what he is used to back home:

During the Talent ID programme Sergej has attended morning classes highlighting the content of IHM’s Level 3 BTEC in Sport Performance course as well as visiting Abbey College Manchester were A levels and the International Foundation Programme are taught. He has received an individual player analysis from an IPSO scout as well as a one-to-one tutorial with his coach to explore the findings of the report and discuss suitable pathways towards playing at a higher level and university education.

However, it is not all hard work on the Talent I.D. programme, Sergej has also had a guided tour of Old Trafford, the home stadium of his beloved Manchester United FC, he has been to the National Football Museum, played in a mini- 4 aside tournament, played in friendly matches against another local academy and been on full day excursions with his fellow players each Saturday.

If you would like the chance to understand how you can achieve your football potential, contact us now to learn how we can help you take your game to the next level.