Dominant Start to the League Campaign 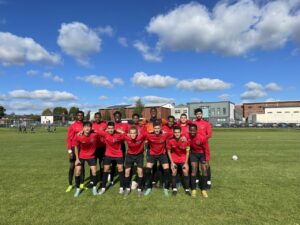 The IHM academy had an outstanding start to their first ever league season with a 12 – 3 victory away to Ashton Sixth Form college.

Wednesday 6th October saw the start of the season, with the players travelling to Aston sixth college for their debut game. The IHM academy came into the game on the back of being undefeated in their opening friendly games and a months pre-season training.

The tea, started strong an applied everything they had been working on in training, outplaying the hosts throughout the game. Andrew Waswa was a standout performer on the day, gaining man of the match and netting 7 goals. Andrew has been training with Marine during the summer, and the continued training at a high level showed with his fitness and sharpness up front. Michael, Aria, Kieran, Juyoung and Gerald all scored to make it 12 in the game.

Head coach Matt commented “it’s great to see the players applied what we have been doing in training, they were excellent out their today. That’s a great start to the league which should see us go top, but now the work starts as we will be the ones to beat, the games aren’t all going to be like that and we need to ensure we continue to work and train hard to keep up that performance. But for today, we’ll celebrate the win and be back to training this week ready for the next game”

The IHM team will not be working towards next weeks fixture away at Oldham college and await the final results from the other games to come in and see where that result takes them in the league standings.