Alex Selected for the County Side 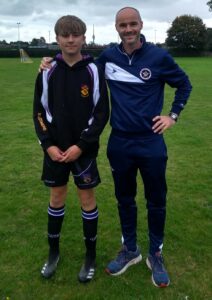 Alex Sharpe, one of our new signings to the Ellesmere football academy this season, has already been showing his ability and has been the first of the team to be spotted for a progression. Following in the footsteps of a number of our players over the past few years, Alex will represent the Shropshire county side on Wednesday 20th October.

Alex joined the Ellesmere football academy in September 2021 after the academy was opened up to the day students at Ellesmere college. Prior to this season only the boarders at the college had been able to attend due to the timetable clashes, however with the new timetable meant that more players, including Alex, could access the top level coaching on offer.

From the start of his time at the academy, and within the first few weeks Alex impressed the coaches, leading to a nomination from Head Coach David Raven for him to go forward to county trials. Alex must have impressed in the trials, which are hard fought with the best players from across Shropshire attending, as he was selected for the team to play against Warwickshire.

David Raven comments “Alex deserves this chance. He’s a great player, impressed us in his first few weeks and will do really well for the Shropshire county side. It’s a real chance for him to push onto the next level, show what he can do and get seen on a bigger stage. That’s what the programme here is all about, so if we can help players to progress on that’s great.”

As part of the programme at Ellesmere the coaches are always looking to improve the opportunities for the players. This is just one way that players have an opportunity for progression. When they show ability, determination and drive to succeed then we can assist onto that next level.

Everyone at the academy wishes alex all the best for the game and his future with the county side. Well Done!