An IHM Victory in the Opening Game 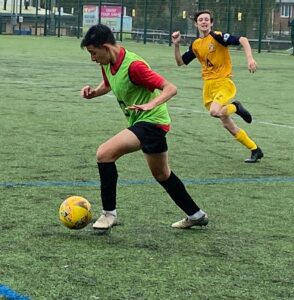 As the teams warmed up and lined up for kick off it was clear that the visiting side were well prepared and had possibly been in training longer than the IHM players’ week and a half on the pitch. In what was a very physical and competitive start to the game, the home side were straight on the back foot, with some frantic defending and often being outpaced at the back by the strong and quick wide players of Dragon.
Early in the first half, from a loose pace in the middle of the field, the visitors picked up the ball out on the left, cut inside and from a long range effort which bobbled in front of the keeper, took the lead. Quickly after the restart, with a copy of their first goal, the visitors doubled their lead and it looked to be a long day for the home side.

As the first half went on, IHM settled a little into the game, coming close on a few occasions but still under pressure from the visitors. However, with a great ball through just before the break, Andrew turned his defender and got one back for the home side, taking the game into the half time break with them back in the game. 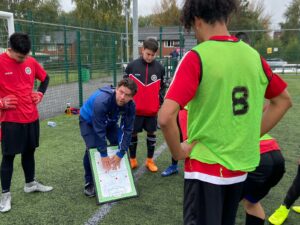 After the half time team talk, IHM came out stronger and started to play football with a purpose, competing more in midfield and winner more challenges. Early in the second half the work paid off when Andrew once again got the right side of his man and run through to level the home side. The celebrations were short lived though as the visitors quickly hit back to go one up once more, catching IHM asleep at the back. Once again there was a big ask for the home side to get back in the game.

As the second half went on, the football and the calmness on the ball of the home side increased, frustrating the visitors who, whilst strong and quicker than IHM, couldn’t get near some of the players. Midway through the second half, with a strike from outside the box, Said drew the home side level again, then followed up with a second with 15 minutes to go to give IHM the lead for the first time in the game. For those last 15 minutes it was backs to the wall for the home side, with some brave heart defending and a few near misses from the visitors to keep the lead, and when the refs final whistle went it was a relief to the home side after being under pressure for the remainder of the game, but they came away with the win in their opening game.

Head Coach Matt Lowe said “it was great to get a win in the first game, full credit to the players for their effort and resilience there, we led a charmed life for a large spell of that game, and realistically they were stronger than us in a lot of areas. Some of their misses in the last few minutes let us off a little bit, but we played football, we competed, we worked hard, and that’s what wins football games. There is a lot for us to work on and the lads have had a introduction to what English football is like. Overall really pleased for the players, they deserved that today and it will give them a great boost going into the next game.” 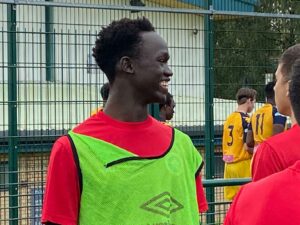 Andrew received the man of the match for the work rate and two great goal.

IHM are due to play again on Wednesday 30th September at home to Isport academy which will be another tough game.

Find out more about our A Levels + Football courses