A TEAM performance wins the game in Manchester 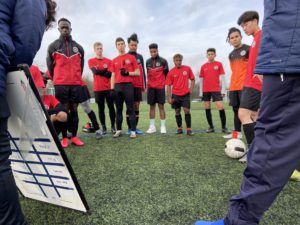 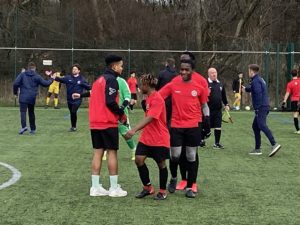 The IHM senior squad were back to winning ways this week with a fantastic performance which resulted in a late winner at home to Dragon Academy.

From kick off the visitors started brightly, looking athletic and strong. It took IHM a while to setting into their game, however after soaking up some pressure in the first ten minutes, IHM took control of the game, playing some delightful football out from the back and creating a number of chances. For all the fantastic play at the back and in the middle of the park, IHM couldn’t make it count and totally against the run of play went 1 down from the penalty spot.

IHM responded well, playing a patient game and winning their individual battles in the middle of the park, and the hard work was reworded shortly before half time when Fifi spotted the keeper off his line and struck the ball over him and watched it nestle in the top corner to level the score.

From that point IHM were the better side but once again a lack of concentration saw the visitors take the lead into the break.

After a half time team talk the IHM side came out with an increased intensity, pressed their opponents and very quickly got the game level thanks to a second from Fifi. Kash then followed up with what much be a contender for goal of the season, with a striker from 25 yards that went like a bullet. Celebrations were still going on over that goal as the visitors broke quick from the kick off down the right and level the game straight away taking it to a nail biting final few minutes.

IHM pressured and continued to play some great football, making runs into the visitors’ box and with just a minute to go the visitors gave away a penalty. Up stepped Fifi to complete his hat trick and win the game for the home side.

A deserved win for the home side who showed not only great play, but managed the game very well up against a strong and physical side.

Matt Lowe, head coach said “A great win for the boys today and a much needed one. We played some great football today and really could have scored more if we’d had a little more composure in the final third. They were a tough side and we dealt with that well. Full credit to all the boys today, that was a team performance to be proud of”