“A player you would like in your team, giving positive support for all of his team.” 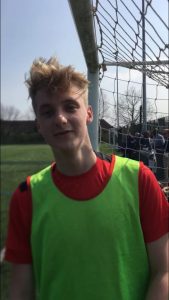 A positive attitude and some humility make a young player a much more desirable prospect for a coach or a scout. Understanding how a player reacts to constructive feedback is paramount when it comes to evaluating the potential of a young player.

At a Showcase event or Trial, scouts will be watching players to get a feeling for their character and attitude. As much when they are not on the field of play as when they are on the pitch.

David first stood out simply because he was making an effort to chat to his team mates, who he was meeting for the very first time, in the Showcase 11 aside match as they were all warming up. He was genuinely interested in how they felt about the day and trying to put them at their ease. This showed leadership, even before he had kicked a ball. No-one had asked him to do it, he took the initiative and was repaid with a chat. David had effectively already started to build a rapport with the other members of his team.

So, it was incredibly satisfying to later read the IPSO scout’s report on David:

“A great leader and captain material, always communicating with his team giving good positive clear advice. He had a great temperament and is a player you would like in your team giving positive support for all of his team.”

Unsurprisingly, David was invited to train pre-season by one of the scouts attending the event that day. We wish him all the very best.

We certainly agree with the scout when said the following about David:

“Strong player with a confident and composed attitude, a leader and captain, vocally really good with clear positive advice.”

Would you like to join David and see how far that you can take your football? CONTACT US NOW! – email: peter@ihmanchester.com