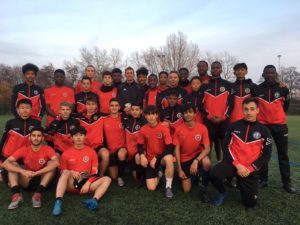 Today was very special for the young players in the IHM Football Academy squad. Ex Manchester United and Scotland player, Darren Fletcher, led a specialist coaching session this afternoon on counter attacking and quick shooting. The drill was repeated getting progressively faster. The squad then went on to full 11 v 11 match play, under Darren’s watchful eye.

“To have such an experienced professional player lead coaching today amounts to a phenomenal opportunity for our young players. They can’t help but be inspired and motivated.” said IHM Director of Football, Mick Brennan.

Fletcher came through the ranks of Manchester United’s Youth Academy and spent 20 years with United, making 342 appearances for the club. With them, he won five Premier Leagues, one FA Cup, two League Cups, the UEFA Champions League, four FA Community Shields and the FIFA Club World Cup. Fletcher was included in the PFA Premier League Team of the Year for 2009–10. He was named vice-captain in his last season with the club. He joined West Bromwich Albion in February 2015, where he made 97 appearances, before signing for Stoke City in June 2017.

Fletcher made his Scotland debut in 2003 and scored his first international goal on his second appearance. The following year, he played as the team’s youngest captain for over a century. After Barry Ferguson was banned from international football because of a breach of regulations, Fletcher was given the captaincy on a full-time basis in August 2009. He has won 80 caps and scored five goals for Scotland.